By Elizabeth Coulter, Associate Curator of Education on September 20th, 2019 in Blog 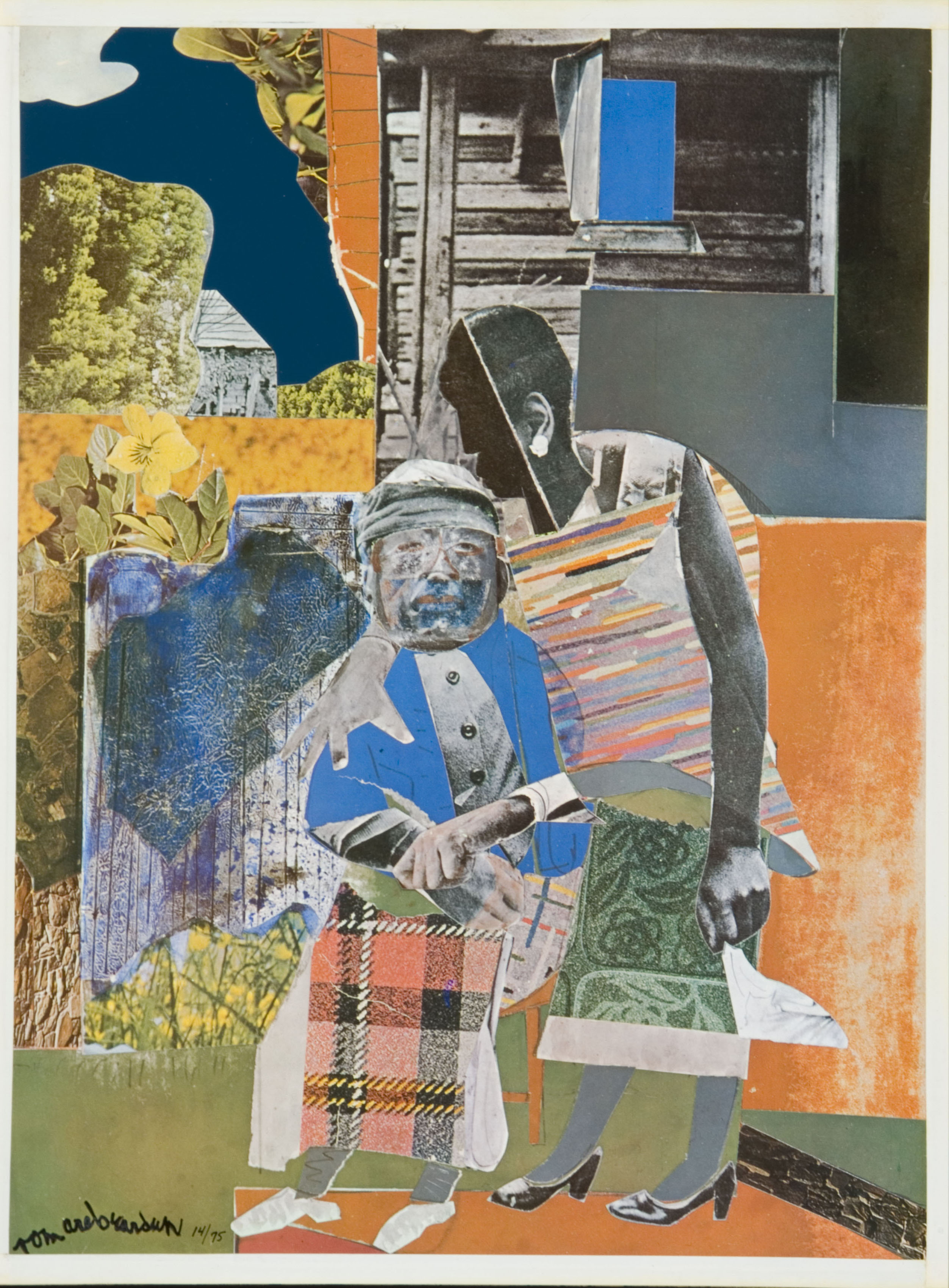 Three times a year, the Cornell Fine Arts Museum (CFAM) hosts special seasonal exhibitions from both national and international lenders that connect to the museum’s mission and collection. This fall, the museum features the exhibition African-American Art in the 20th Century from the Smithsonian American Art Museum in Washington, D.C. The exhibition highlights the work of 32 artists, several of which are in CFAM’s permanent collection, including: Melvin Edwards, Sam Gilliam, Felrath Hines, Jacob Lawrence, Whitfield Lovell, Purvis Young, and Romare Bearden.

One work in the special exhibition by Romare Bearden offers an interesting comparison to a work of his in CFAM’s permanent collection, as both serve as unique examples of his work in lithography during the 1970s.

Romare Bearden
A prolific artist, writer, and social activist, Romare Bearden worked in a variety of media, including oil, watercolor, gouache, collage, mural, and print to explore themes of history, mythology, and everyday life in Black America (1). He was born in 1911 in Charlotte, North Carolina and moved to New York City with his family in 1914. In 1920, his family settled in Harlem, and by 1936 Bearden began his art career studying at the Art Students League and Columbia University in New York City (2). As a leading artist during the Harlem Renaissance, Bearden gained stylistic inspiration from his colleagues in addition to art historical sources of European art and African sculpture (3). Over the course of his expansive career, his memory-filled compositions incorporated urban scenes of family life, jazz, and religion often set in personal places like North Carolina, Pittsburgh, and Harlem (4). In the 1970s, Bearden explored genre and myth and created several series including Ritual Bayou, Prevalence of Ritual, and the Jazz Series (5).

Bearden’s Ritual Bayou Series
Romare Bearden’s 1972 series, Ritual Bayou, has resided in CFAM’s collection since 1983. He created the Ritual Bayou series as the first of a three-part project, Trilogy, in collaboration with Shorewood Publishers. Due to the unwieldy and challenging process of creating photo-lithographs printed from collages, the artist never completed the project. Though he intended to create 75editions of the Ritual Bayou series, the number of complete editions remains unknown; CFAM’s series is numbered 14/75. The six collages that make up the full set of Ritual Bayou includes Ritual Bayou, Byzantine Frieze, Carolina Interior, Memories, Mississippi Monday, and Reunion (6).

Reunion exhibits his characteristic collage technique that utilized pieces of magazines, posters, and various textured and painted papers to create “patchwork Cubism” compositions. Here, Bearden plays with pattern and texture to produce a visually complex scene. Some of the most intricate patterns within the composition draw the viewer’s attention to the central figures positioned in an intimate embrace. Depicted in a domestic setting, this warm moment, is reminiscent of his rural scenes often connected to his memories in North Carolina.

Bearden’s Jazz Series
Bearden’s 1979 lithograph Bopping at Birdland (Stomp Time), from the Jazz Series, however, offers a look into city life and exemplifies his expressive technique seen in most of his paintings. Bearden’s varied brushwork creates movement in the scene, with fluid, overlapping marks and undefined forms. His use of color helps lead the viewer’s eye throughout the scene from the vibrant blocks of red, blue, and green in the background to the bright yellow saxophone in the foreground. The musicians occupy half the space in the composition, and the cropped figure in the front gives the effect that the viewer is on stage with the performers. His use of light enhances the viewer’s vantage point. The silhouetted, indistinct audience in shadow of the stage light contrasts the musicians in bright light rendered with more clarity. All these formal elements of the scene work together to generate the vibrant atmosphere of Birdland.

Bearden felt jazz represented the energy of life, and it had always been a part of his world (7). Harlem had, and still has, a flourishing music scene with landmark jazz clubs and performance halls. Bearden grew up in an apartment across the street from the stage door of the Lafayette Theatre, and his family hosted several jazz artists throughout his life. He also worked in a studio above the Apollo Theatre for years and gained inspiration from other jazz clubs like Milton’s and Birdland. Here he depicts this energetic scene at Birdland, one of the leading jazz clubs in Harlem named for its first routine headliner, the saxophonist Charlie “Yardbird” Parker.

These works show the range of Bearden’s artistic ability and aesthetic output, while offering a glimpse into his personal history and memory.

Visitors can experience the Smithsonian work this fall season (Sept. 21–Dec. 29, 2019) on self-guided visits during museum hours or weekly highlights tours on Saturdays at 1:00 p.m. On Saturday, Sept. 21st, the museum will feature this work in a special version of the highlights tour with the theme of music as a part of the Smithsonian Magazine’s Museum Day. Also, join Smithsonian American Art Museum’s Curator Virginia Mecklenburg for an in-depth lecture on the diverse perspectives that make up the American story as reflected by the broad selection of works in this exhibition on Oct. 22nd at 6:00 p.m.