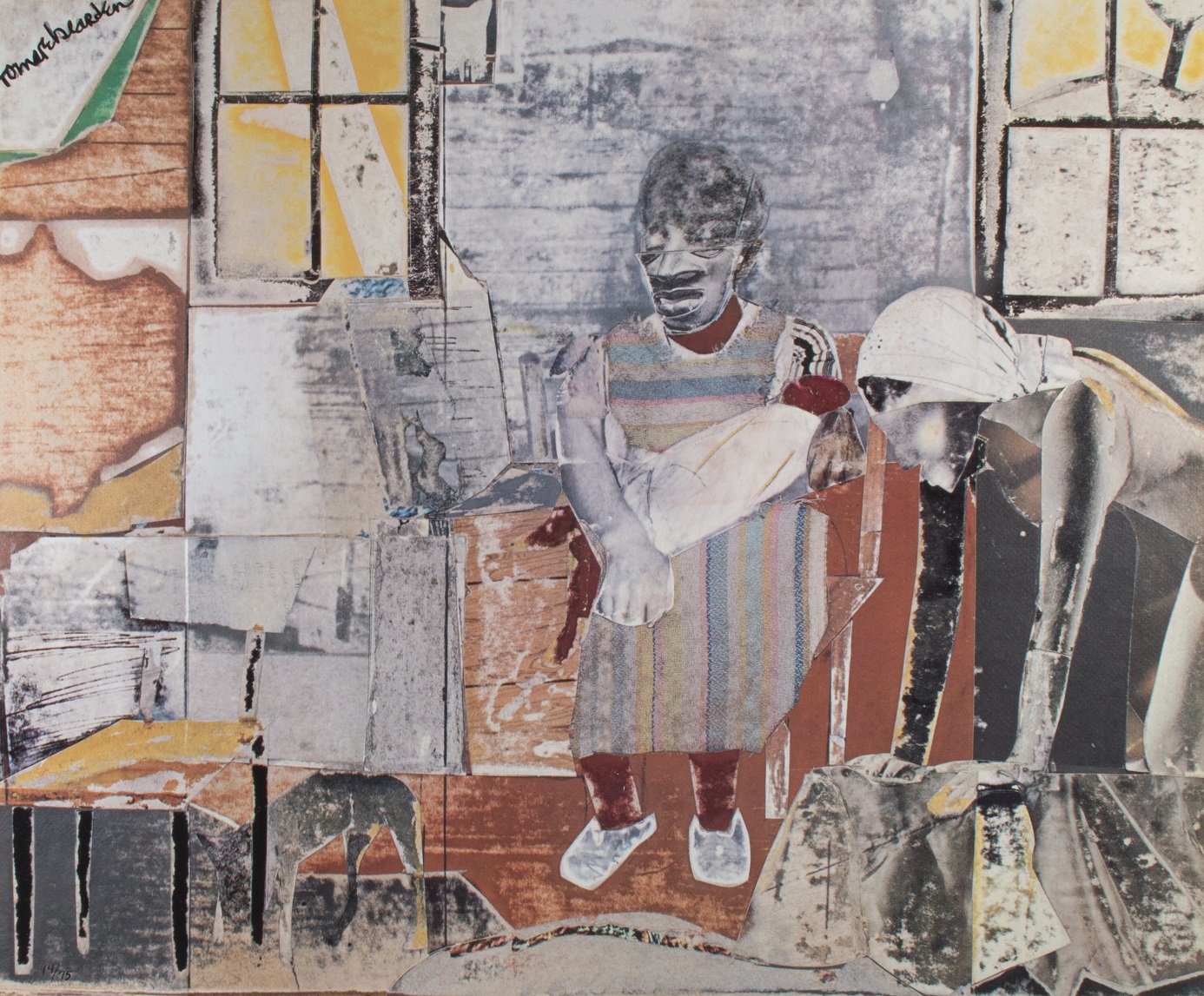 Recently in the United States there has been a great outpouring of activism, causing many of us to examine our places in the country and the world. Activism often goes hand-in-hand with artistic production, with professional and amateur artists alike using their work to reflect on the world and advocate for change. For many artists activism is inseparable from their artwork. Some try to keep the two realms relatively separate, or at least to allow their art to speak to its own issues without only being about activism. And for others—like the twentieth century American artist Romare Bearden—activism can spark new heights of creative discovery.

According to Bearden’s biographer, the art historian Mary Schmidt Campbell, he always viewed himself as a “race man,” that is a strong advocate for the rights and advancement of Black people.1 At the same time, he also recognized quite early in his career the “negro artist’s dilemma.” Due to the marginalization of Black people in American life, the way in which African Americans were automatically suspect, a Black artist had to be careful to always be an exemplar of his people. To do so, however, required the use of relatively conservative styles. Black artists, Bearden felt in the 1940s, could not afford to be too cutting-edge, because to do so would render them too threatening, too outside of the mainstream. 2 As a result, Bearden immersed himself in the history of painting. From the time he studied with Georg Grosz at the Art Students League in New York, he immersed himself in the history of art, drawing inspiration from Western painting, classical Chinese scrolls, and African art.3 Before the 1960s, he used those influences to carve out a moderately successful career making mostly abstract, Cubist-inspired paintings that followed current artistic trends, though not too aggressively.4

That began to change for Bearden in the 1960s, as it did for many Americans. Interestingly, however, his first brush with activism did not come through the Civil Rights movement. Instead, he joined a number of other artists who were in the process of being evicted from their live-work lofts on Canal Street, in lower Manhattan. The city had dispatched fire inspectors to the spaces occupied by a number of artists, ordering them all to quit their studios essentially without warning. The artists—who included Bearden, Willem de Kooning, Robert Motherwell, and many others—banded together to form the Artists-Tenant Association, threatening to withdraw their paintings from galleries and museums all over New York, jeopardizing its status as the world’s art center. This action was successful, convincing Mayor Robert Wagner to strike a deal that would allow the artists to stay in their lofts. Even more importantly for Bearden, it convinced him of the power of united action.5

Over the few years after the threatened artists’ strike, Bearden traveled to Paris with his wife, a trip which left him feeling invigorated, and began to experiment with his painting, all while watching the events of the Civil Rights Movement unfold. In 1963, when Martin Luther King, Jr. and others organized the March on Washington, he convened a group of Black New York artists to charter a bus and go down to the March. That group would form the core of Spiral, an artist’s collective that convened regularly to discuss both art and politics.6 At one meeting, he brought a paper bag full of photos and other material he had clipped out of his wife’s magazines (including Life, Look, and several African American magazines), attempting to get his fellow members to join together in a collaborative work, as other Black artists collectives (such as AfriCOBRA) had been doing. The other members, who represented a diverse array of artistic styles, were not interested, and roundly rejected the idea.7

Bearden, on the other hand, was intrigued. Collage was a huge part of the aesthetic of Cubism, a style in which he’d long worked, as well as Dada, a socially conscious art movement with which he was familiar from his studies of art history and his travels in Europe. He began to experiment with the clippings, eventually settling on a technique which combined cut paper, photographs, paint, and pencil marks, all covered with a thick layer of resin varnish to lend it smoothness and stability.8 In these collages, he layered a lifetime’s experience of the richness and complexity of Black life in America, including his memories of family in Charlotte, North Carolina, his knowledge of African and African American art, and the rituals of Black life. In particular, he focused on Black women, including in his collages images of conjur (his preferred spelling) women and other powerful figures from folklore and history.9

These collages were a near-instant success, and they catapulted Bearden to new heights of fame. They also are the foundation of his artistic legacy, the works with which he will be forever associated. During the 1970s he began increasingly to translate his collages into lithographs and screenprints, in order to make his work more accessible to people of relatively modest means.10 One set of these prints, called Ritual Bayou, has found its way here to CFAM. In Ritual Bayou and Carolina Interior, two of the prints from this portfolio, we can see the fruits of Bearden’s transition to collage. Both are based on his trips to Charlotte, North Carolina to visit family, and on his interest in the full extent of Black life in America. They blend photo, cut paper, and inked and painted segments. These are not straightforward images of protest, nor are they unabashed celebrations. Instead, they aim to capture the complexities of Black life in America, both its beauty and its pain.11 It was Bearden’s experience in activism, his excitement over the possibility for change, that made such evocative art possible.

Read more insights on Bearden’s work featured in the 2019 exhibition African-American Art in the 20th Century.