Jim Dine, Mark di Suvero, and the Echoes of Downtown 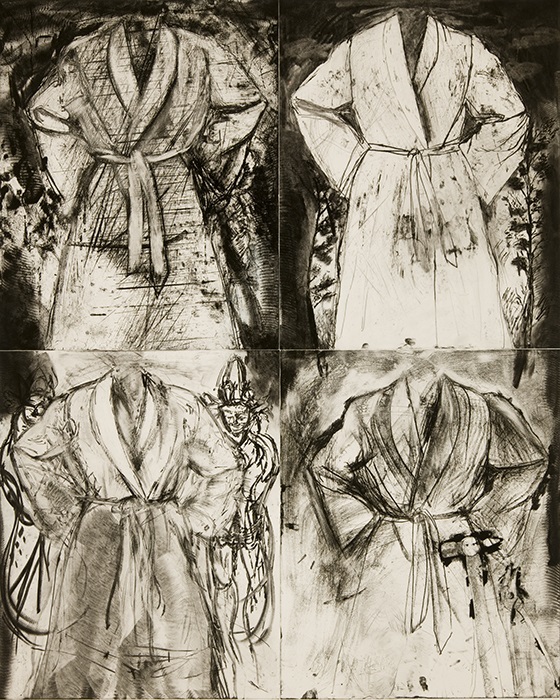 In one of those quirks of the alphabet I wrote about when considering Joseph Cornell and Earl Cunningham, my list of twentieth century American artists includes Jim Dine and Mark di Suvero back-to-back. Both longtime, well-known contemporary artists, the two men otherwise seem to have little in common. Dine, who is best known as a painter and for his prolific printmaking practice, was born in Cincinnati, Ohio to a family that owned a hardware store.1 Di Suvero, known for his massive abstract sculptures in steel, aluminum, and other metals, was born in China to Italian parents who moved to San Francisco rather than return to Mussolini’s Italy.2 Both men, however, were interested in being artists, and so both found themselves in Downtown Manhattan in the early 1960s, Dine after graduating with an art degree from Ohio University and di Suvero after studying philosophy at UC Berkeley. Both also, it turns out, gravitated towards the Downtown scene, which was full of younger artists who were shut out of the Midtown galleries, which were still dominated by Abstract Expressionism. Joining in the informal, DIY artist’s spaces like Judson Church in Washington Square, each of the men produced a Happening, a kind of group performance overseen by an artist or group of artists that was the forerunner of many later currents in contemporary art.3

The Downtown scene was full of future art world luminaries, including Claes Oldenburg, Tom Wesselmann, and Allan Kaprow. Soon, the sought-after alternatives to Abstract Expressionism would start emerging, including Minimalism and Pop, two art movements that would dominate the later 1960s and into the 1970s. Though the movements seem to have little in common, they share a skepticism for the broad gestures and psychological content of Abstract Expressionism, instead preferring the harder-edged and more impersonal aspects of advertising and industrial design, among other signifiers of late-twentieth-century modernity. Dine, who made paintings and prints depicting tools, bathrobes, and other everyday objects, was often categorized under the Pop label, while di Suvero, who made large-scale sculptures out of industrial materials, was frequently lumped in with the Minimalists. Both artists loudly—if sometimes ineffectively—protested these categorizations.4 Dine—who was heavily criticized for beginning to paint, draw, and print the human figure in the 1970s—was making pictures of things with deep personal meaning. The bathrobe, in particular, was his stand-in for his own consciousness.5 Di Suvero, meanwhile, has always held tightly to his craftsmanship, learning to use the cranes and other heavy machinery that allows him to create his sculptures, rather than simply providing plans to industrial fabricators—like Donald Judd—or using off-the-shelf components like Dan Flavin. In particular, di Suvero has always embraced serendipity, physical engagement, and play, all of which are the antitheses of Minimalism’s cold intellectualism.6

Coming into the Luce project, I—an expert in a much earlier era—was aware of these two artists. Di Suvero in particular is hard to miss, with his massive, often bright red sculptures present in nearly every outdoor sculpture park. But I must say I was skeptical of both, viewing each as somewhat minor members of movements, it turns out, they wanted little to do with. Researching both artists this week has been an absolute joy, and my excitement has grown as I have read their words and looked over book after book full of their art. Moon Dog, a small sculptural puzzle di Suvero executed in collaboration with Gemini G.E.L. in Los Angeles, is one of those works I’ll take a closer look at when I get back to Winter Park, in order to fully experience its intricately cut jigsaw pieces and the way the light plays across its surfaces.7 It is Dine, however, who has catapulted into the pantheon of one of my favorite artists. Blue Wash, Four Robes, for example, is huge for an etching, and a prime example of how Dine has used his repetition of forms to push the boundaries of printmaking beyond what once seemed possible.8 I can’t wait to get that out of storage and take in all its nuances, the ways in which Dine has smeared and smudged the ink across the surface of the plate, and all the ways in which he has varied the lines, perhaps using dental tools or even power tools from the hardware store, both common practices for him.9 It just goes to show the power of knowledge, and how really taking time to engage with artists and their work can yield new insights.