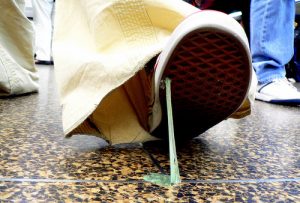 One of the many things we now know from the last few decades of research on how people learn is that prior knowledge is critical to the development of new knowledge. It can serve as a foundation for learning new things and making new connections, like a network of rope bridges through an unending forest canopy. Or it can stubbornly inhibit new learning with clingy misconceptions, like fresh gum stuck on the bottom of our shoes.

One such wad is the persistent misconception of learning styles, which keeps stopping us, halting our pace as evidence-based conversations about effective learning strategies march forward with stronger and cleaner soles. Okay, I’ve exhausted the simile, so I’ll cut to the chase by highlighting some of what others have written.

First, Pashler, McDaniel, Rohrer, and Bjork (2008) found that, despite many, many attempts, researchers have produced no evidence that, for example, teaching visually to purported ‘visual learners.’ Despite many attempts. No evidence. The Association for Psychological Science 2009 summed it up with “Learning Styles Debunked: There Is No Evidence Supporting Auditory and Visual Learning, Psychologists Say.”

Jump forward a decade, and we’re still messing with that wad of gum. A 2018 article in Scientific American tries again and goes further, pointing out “The Problem with ‘Learning Styles‘”: our attention to learning styles, or helping visual learners by using more visual teaching strategies (etc.), is better spent implementing learning strategies that have lots of evidence of effectiveness, such as spaced practice, retrieval practice, elaborative interrogation, and multimodal exposure. Others are even pointing out how the myth does students a disservice, even harm, by wasting time and enforcing a limited self-label and “perpetuat[ing] failure” (Marshik, 2015).

In “Why Stubborn Myths Like ‘Learning Styles’ Persist,” Belenky (2017) attributes our fondness for learning styles to its support for our teaching autonomy, its simplicity, and our attraction to that which proves us right. The efforts to correct the myth are so widespread that even The Onion has satirized it.

Finally–but not finally, as gum would probably survive a nuclear blast–the helpful folks at The Learning Scientist have given us advice for “How to Talk About Learning Styles,” worth listing in full:

Let’s hope another decade doesn’t pass by while we have this exact same conversation. I’d rather spend some time playing on those rope bridges in the forest canopy.

Thanks to Margy MacMillan, Derek Bruff, and Matt Fisher for recommending Belenky, The Onion, and the final Learning Scientists link during a recent Facebook discussion of this phenomenon.

One thought on “On ‘Learning Styles,’ Again–or Oh Dear, What’s This On My Shoe?”