THE POWER OF ART IN A WORLD OF COVID-19 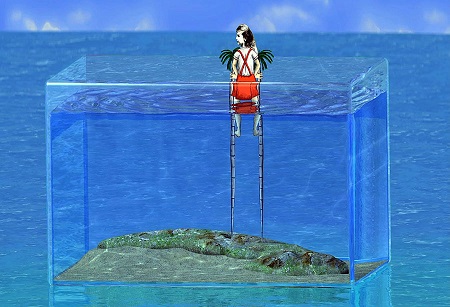 Back in January, we included Aquarium, a 3D video animation work by Cuban artist Sandra Ramos, in our museum’s collection installation, The Place as Metaphor: Collection Conversations. The narrative crafted by Ramos responded to the theme on multiple levels: it renders both a defining physical place (the island of Cuba) and the artist’s complex metaphorical relationship with it.

The story features a recurring character in the artist’s oeuvre: a little girl loosely modeled on the protagonist of “Alice in Wonderland,” who wears a uniform reminiscent of the youth organization of the Cuban Communist Party (minus the neckerchief). She is Ramos’ alter ego, embodying her deeply felt yet ambivalent relationship with her home country. The girl is shown stretched out across the island, her shape lovingly hugging the coasts, palm trees sprouting from her body. It is hard to imagine a more intimate, almost organic rendition of the link between self and land. And yet, this is a land in which the girl feels trapped (glass walls grow around the island, placing it at the bottom of an imaginary aquarium), and from which she is constantly trying to escape. She walks on stilts trying to jump over the wall only to fall back in. She swims toward the light but realizes she can only swim within the enclosure. In the end, the photograph of a crowd of people is superimposed onto the island and produces an explosion which destroys the walls. Freedom may be at hand.

Aquarium became one of my favorite works in the collection the moment we acquired it in 2014. It was the time when — after almost half a century — diplomatic relations between the US and Cuba had resumed, and thus the nuanced story of isolation followed by hope realized was potent and timely. But for me, there was another level of resonance: Having grown up in communist Romania, and spent my teenage years dreaming about ways to leave the country, the narrative was familiar and touching in a personal way. Ramos had captured so well that feeling I found impossible to articulate to my American-born daughter: the tension of simultaneously belonging to a place and culture and desperately trying to flee them; the ambivalence of finally leaving. In discussions with our students, Aquarium eloquently spoke to the universality of art, illustrating how the same narrative affords multiple readings based upon the personal circumstances of the viewer, as well as the time and place of the encounter.

I was reminded of this yet again as I sat down to write this post. I had planned it to celebrate Women’s History Month and the National Museum of Women in the Arts (NMWA) #5WomenArtists campaign. My hope was to entice people to come see it in the current installation. Previously, we had only shown it on monitors, and the experience is entirely different when watched on a large screen. This was before museum closures and social distancing. Now, all I can share are video stills; the invitation to experience it in person will have to wait. And yet, something new has become visible. A different layer of meaning announces itself as we all grapple with the unprecedented conditions of the pandemic. The feeling of isolation, of being trapped in a place from which one cannot escape takes on different meaning as people around the county yearn to see their loved ones or exchange the occasional word with a stranger in a café. Similarly, the scene where the girl watches television and microphones come out of the screen, grab her, and pull her into the TV set is starting to feel like an apt visualization of the barrage of bad news (in various media) we are constantly confronted with. So while I cannot invite you to sit in our video room and be fully immersed in this incredibly powerful — universal yet extremely personal — story of belonging, isolation, yearning, and seeking refuge, I can share with you the power of art to transform itself under our very eyes and assume new and timely meanings. And with these meanings, address and, more importantly, assuage our fears.

View a 2016 CFAM in 60 Seconds with Artist Sandra Ramos