By Elizabeth Coulter, Associate Curator of Education on April 22nd, 2020 in Blog, Permanent collection, The Alfond Collection of Contemporary Art at Rollins 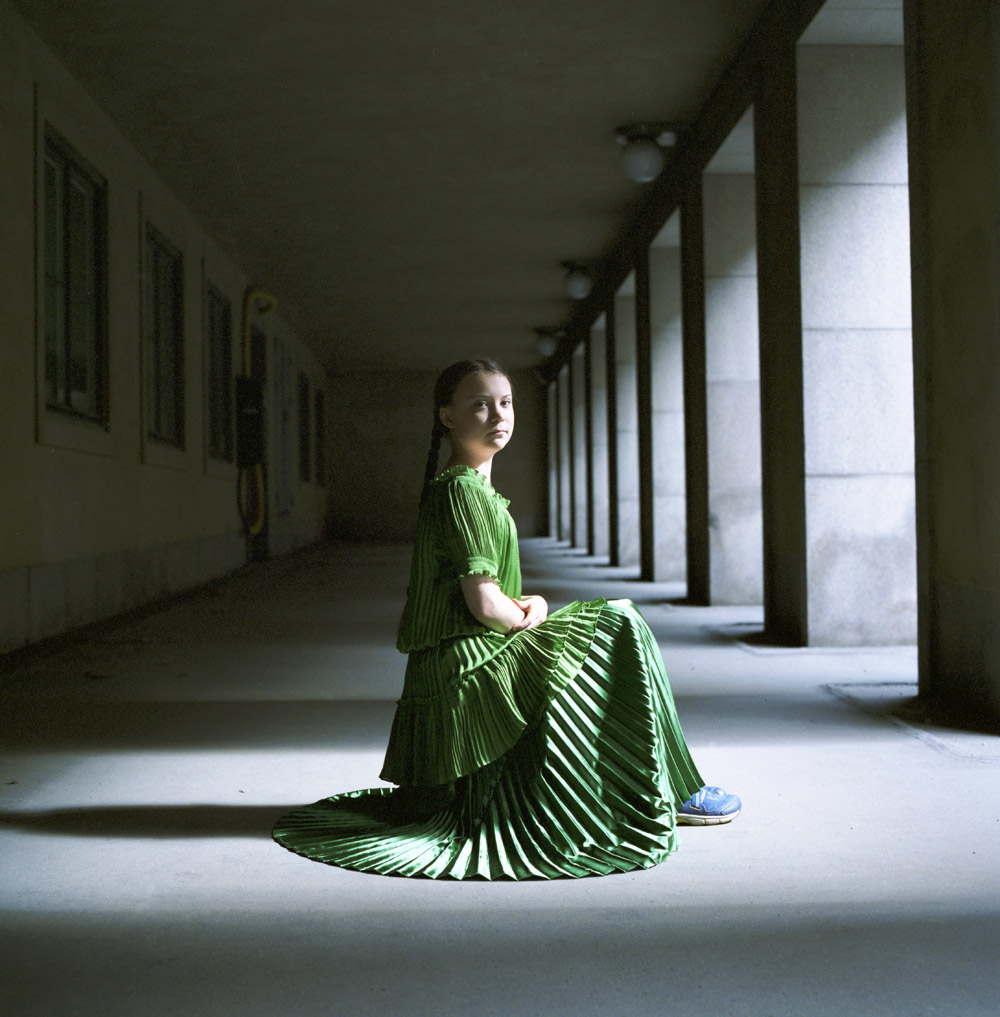 “Change is coming, whether you like it or not.” – Greta Thunberg

What change is coming? Climate change and the movements centered around it. As we celebrate Earth Day on April 22nd, an annual event dedicated to environmental protection, here’s a look at how a selection of contemporary artists in the museum’s Alfond Collection of Contemporary Art integrate environmental mindedness into their practices to incite change.

Hellen van Meene
TIME commissioned Hellen van Meene to photograph Greta Thunberg, an increasingly significant climate change activist, during one of Thunberg’s school strikes in late April. The photograph was featured on the cover of their May 27th edition in 2019. Now named in TIME’s “100: The World’s Most Influential People” and in their Next Generation Leaders, Greta Thunberg’s influence reaches new heights. “Thinking about Greta, I wanted this photo to be different, because her story is bigger than life,” van Meene shared.  She photographed Thunberg in a stark, shadowy, desolate concrete corridor in Stockholm’s Old Town of Gamla Stan near Swedish Parliament. Thunberg fashioned here in a green dress selected by the photographer to symbolize “life,” contrasts her bleak surroundings that represent the possible future of her generation if the world does not take action. The artist adds, “We shouldn’t see Greta as a young cute thing; she’s a serious girl with a serious message.”

Juan Travieso
Throughout his practice Juan Travieso studies biodiversity, the variation of life in the world, to reveal how human intervention adversely impacts other species. In his geometric, vividly colored, abstracted paintings, Travieso renders endangered or extinct species. He created this work in 2012, just after the passing of Lonesome George, the last Pinta Island tortoise. Here, the goats that surround Lonesome George in this rocky landscape indicate how the rarest animal in the world became extinct. The goats, an invasive species introduced to the island by people, destroyed the vegetation and exhibited a drastic result of evolution. While this shows the vulnerability of endangered species, it also exposes the uncertainty of our future if these actions continue. How long before these exploits drastically impact humans?

Maya Lin
Maya Lin’s ongoing rivers series also considers the fragility of life and preserving our natural resources for the ecosystems they support. Her reflective sculptures, cast in recycled silver, render the world’s most indispensable rivers. Here she pictures the River Thames, the longest river in England that runs from Gloucestershire, through London, and ends between Kent and Essex. Once declared biologically dead in 1957, the river underwent significant restoration and is now the cleanest it has been in more than 150 years. Here, Lin presents an example of an essential resource revitalized after human neglect to drive change.

Carolina Caycedo
Carolina Caycedo frequently investigates the subject of water politics through performance, film, installation, and sculpture. During her field research in Girardot, Colombia, a small town along the Magdalena River and a community drastically affected by the privatization of water, she began her series Cosmotarrayas – a combination of cosmo and atarraya, Spanish for “cast net.” Caycedo constructed her sculptures from handmade fishing nets the artist bought from friends and local markets in the community. Then in her Los Angeles studio, she dyed them in vibrant colors and formed them to recall the diverse ways fishermen and women cast their nets. Thus, the sculptures embody the individuals, their knowledge, and their instinctive bonds with the river. Through each sculpture, the artist hopes viewers not only reflect on the personal loss and resilience of the Girardot community, but that they also reestablish their personal relationships to water, an invaluable resource worldwide.

Mel Chin
Like Caycedo, sculpture and video artist Mel Chin frames his work, The Arctic is Paris, to challenge viewers’ perceptions of how the environmental crisis evolves on a local versus global scale. In this video, Jens Danielsen, an Inuit subsistence hunter from Greenland, appears dressed for the arctic in the city of Paris. He moves through several locations on a sled pulled by standard poodles. While the juxtaposition of Danielson against the Paris city streets may surprise viewers, they may be more surprised to find that while the melting snowcaps has drastically impacted his hometown, they have also affected the environment in Paris. Danielson states: “We are not separate; we are connected. The Arctic is Paris. The Arctic is Des Moines. The Arctic is Nairobi. The Arctic is Beijing. The Arctic is Aleppo. The Arctic is ____ your town.” Chin filmed this work during the 2015 United Nations Climate Change Conference that brought in many of the world’s leaders to increase visibility on the topic and to create a global agreement, the Paris Agreement, to reduce climate change. Over the past few years, conferences, protests, and activists have made significant strides in generating environmental consciousness.

4 comments on “Change is Coming”