By Ena Heller, Bruce A. Beal Director, CFAM on August 25th, 2018 in Rennaissance 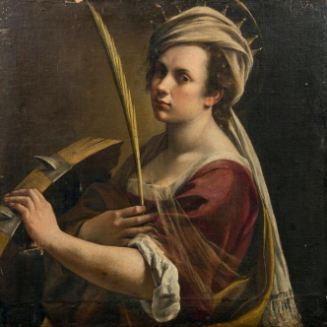 One of the rarest paintings in the Cornell Fine Arts Museum’s collection is Lavinia Fontana’s Dead Christ with Symbols of the Passion. Dated 1581, It is one of only 32 signed and dated (or datable) works by the artist. Lavinia Fontana (1552-1614) is among a handful of women artists from the Italian Renaissance and Baroque periods known today, and possibly the first woman in pre-modern Europe to have what we would call a successful artistic career – something that continued to be a rarity until well into the 18th century. Trained by her father Prospero Fontana, Lavinia started by assisting him and slowly taking on some of the smaller-scale commissions that came into his studio. By her early 20s she was working independently and enjoying commissions not only for portraits, but also for the then-considered higher genres of religious and mythological painting. In 1603 she moved to Rome at the invitation of the Pope and became one of the first female members of the painters’ guild, the Accademia di San Luca. Having an urban workshop that enjoyed plentiful commissions – not to mention sustaining a career even after getting married – was highly unusual at the time.

One of the best-known female painters to have followed in Lavinia’s footsteps, only a couple of generations later, was Artemisia Gentileschi (1593-1653). Regrettably, much of what is commonly known about Artemisia has less to do with her remarkable talent and artistic career and more with the experience of having been raped by another painter in her father’s studio, and the consequences of confronting her aggressor instead of accepting her fate. The story about Artemisia — outside of art historical circles — seems always to be about something else rather than her art. I was reminded of this last month when the National Gallery in London made headlines in the art media (and beyond) with its acquisition of Artemisia’s Self Portrait as Saint Catherine of Alexandria. Most notices focused on the fact that it was the first painting by a woman to be purchased by the August institution in 27 years, making it only the 21st work by a female artist to join the permanent collection.

Several facts about all the media attention are worth noting. First, it is not often that Old Masters paintings make headlines today, unless they happen to be a newly discovered Leonardo da Vinci selling for a record price at auction. Nonetheless, the £3.6 million price paid by the National Gallery was repeatedly mentioned as a record for the artist. The very fact that a mere $4.8 million represents a reason to celebrate is a sad commentary on the prices commanded by Old Masters who happened to be female. By comparison, only two years ago, the Getty paid $30.5 million for a painting by Artemisia’s father, Orazio Gentileschi.

For all the news the acquisition generated, most of it said absolutely nothing about the painting. Jesse Locker’s piece for Hyperallergic was the one welcome exception. His article actually described the painting, lingering on the recognizable likeness of the artist, the beautiful, tight brushwork, and asking valid questions regarding the frequency of self-portraits in Artemisia’s oeuvre and her place in the landscape of 17th-century art. The irony is, if one takes the time to explore Artemisia’s world and what is known about her art, plenty of information is at hand. Probably the best known female artist of her century and the only female follower of Caravaggio, Artemisia benefits from substantial research, most significantly by Mary Garrard, the author of two books (Artemisia Gentileschi Around 1622: The Shaping and Reshaping of an Artistic Identity, University of California Press, 2001 and Artemisia Gentileschi: The Image of the Female Hero in Italian Baroque Art, Princeton University Press, 1989) and numerous articles on the painter.

Mary Garrard wrote an essay for the catalog of the exhibition Dangerous Women, opening at CFAM on September 8, 2018. She will be giving a public lecture at the Museum, sharing some of the research to be published in a new book. So if you are interested in the historical context of art, if you want to go behind the headlines and glimpse the contradictory world of a female painter in 17th century Florence, we invite you to mark your calendars for November 27 at 6PM. Without revealing too much, there may have been some early feminist writings circulating in the 17th century, and Artemisia may well have been aware of them.