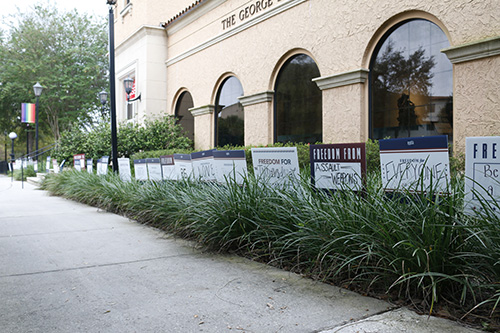 On January 6, 1941, President Franklin D. Roosevelt delivered the State of the Union Address to Congress amid a highly charged international political climate. Commonly known as the Four Freedoms speech, the address became a statement to the core values that distinguished America from fascist regimes during World War II. In his presentation, Roosevelt argued for the United States’ involvement in the war and its duty to continue support to Great Britain. The four freedoms — freedom of speech, freedom of worship, freedom from want, and freedom from fear, provided a common goal, a set of universal principles intended to galvanize support for intervention, and a reminder of the values that were at risk.1 The public was unenthusiastic, and for FDR’s critics, the speech wasn’t more than empty rhetoric.

A couple of years later, in 1943, American painter and illustrator, Norman Rockwell (b. New York, 1894—d. Massachusetts, 1978) embraced Roosevelt’s four freedoms as the subject of an artistic project published in four issues of the Saturday Evening Post. The Office of War Information organized a tour of the paintings throughout the United States, which raised more than $130 million in war bonds.2 The images, inspired by the values set forth in FDR’s speech, became ubiquitous; reproduced in magazines and displayed in public buildings, they became the visual representation of an idea that spoke directly to contemporary viewers. The paintings, which can be viewed at the Norman Rockwell Museum in Stockbridge, Massachusetts, effectively captured the historical moment. Engagement with art can manifest in many ways, and in a time when we are surrounded by visual stimuli, this may be particularly important in our quest to foster critical thinking.

Inspired by Rockwell’s paintings of Roosevelt’s Four Freedoms, contemporary artists Eric Gottesman (b. New Hampshire, 1976) and Hank Willis Thomas (b. New Jersey, 1976), founded For Freedoms, a platform for civic engagement through the arts. The project, which started in 2016 ahead of the presidential election, has galvanized a group of more than 200 established and emerging artists to create billboards with poignant messages throughout the country. More than 400 institutions are partnering with For Freedoms’ 50 State Initiative this year leading up to the midterm election. Museums, art centers, universities, and other institutions across the United States are taking part in this effort, which seeks to “use art to deepen public discussions on civic issues and core values and to advocate for equality, dialogue, and civic participation.”3 The strategy is working; students, faculty, and communities are coming together to debate the issues and create spaces for dialogue and discussion. Media outlets have covered the billboards and town halls (LA Weekly, Vanity Fair, Miami New Times, and CNN online, among others, have published articles on the project), and museums big and small are hosting activations (for a map indicating the location of activations visit https://forfreedoms.org/community/. In the context of the 50 State Initiative, art is intended as conversation; it is sometimes confrontational, sometimes ambiguous, and functions as a vehicle to consider current issues.

Talking about what it means for him to be involved in For Freedoms, Gottesman explains their strategy: “In our project together, For Freedoms, we claim democracy as our medium and the nation as our audience, and we appropriate the tools of political campaigns (billboards, election financing, media coverage, patriotic ephemera) unabashedly, perhaps even earnestly.4 In doing this, the artists become social agents whose platform is amplified beyond the art world.

In academia, interdisciplinary connections are sought as an integral part of teaching and of learning; intellectual inquiry across fields of study reflects the complexities of human thought and experience. It is often in the realm of art and culture that we are presented with opportunities for meaningful reflection, we are encouraged to consider alternative viewpoints, and yes, sometimes provoked, to revise our positions. Active engagement with art as an essential part of critical thinking allows us a deeper understanding of important issues, historic and current, global and local, and their impact on our lives. Museums, and especially those in academic campuses, are vital in creating opportunities for this kind of engagement. And, I would argue, in today’s socio-political climate, museums have a duty, as stewards of artistic legacies, to participate actively in conversations about social responsibility.

How can art facilitate deeper engagement with current issues? How can it encourage meaningful discussions and participation in a broader conversation about social change? The museum as a site for artistic expression, a repository of historical material, and a locus for personal and collective exchanges is an ideal environment for reflection, contemplation, and dialogue, the results of which are often transformative and potentially life-changing. During the month of October, the Cornell Fine Arts Museum, in partnership with Olin Library, has organized a series of events around For Freedoms to foster this kind of engagement. The exhibition Fake News? Some Artistic Responses, curated by Elizabeth Coulter, encourages us to think about the way in which artists have addressed the media and the dissemination of information in the 20th century. A lawn sign activation brought dozens of students, faculty, and staff to the museum throughout the day. The seemingly simple act of filling a sign with a word or phrase and placing it in the garden around the building proved to be a communal moment in which we talked about the issues that matter most to each of us. At Olin Library a display of archival materials makes a connection between Rollins College and President Roosevelt. On March 29, 1936, FDR received an honorary degree from Rollins, an event that brought him to campus and drew the attention of local communities and beyond. Subsequently, in 1956, Roosevelt’s wife, Eleanor, spoke about the importance of the United Nations at the Annie Russell Theatre.

For Freedoms is, so far, the largest collaborative art project in the US. For Hank Willis Thomas “For Freedoms is an opportunity to join our founding fathers in the making of America.” By participating, speaking, listening, and reflecting, we are creating a more inclusive America, one which will be stronger to endure the unexpected and resilient to transcend the immediate.