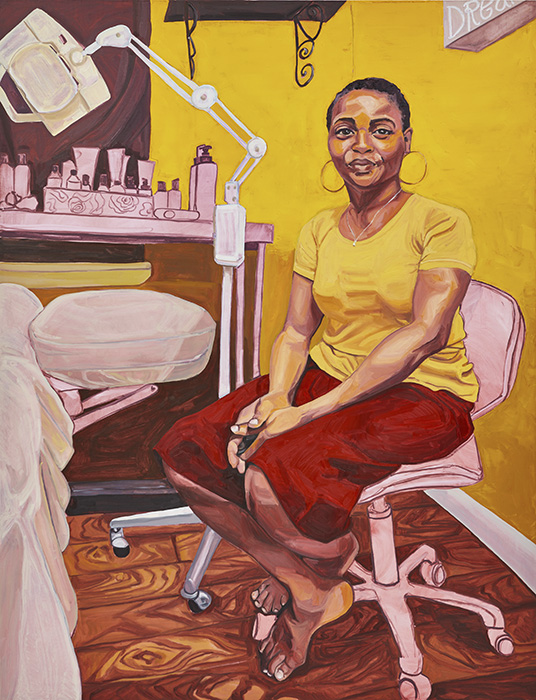 Jordan Casteel and I have Italy and New York in common as career influencers. It was during a semester spent in Cortona as an undergraduate that Casteel decided to switch her major from sociology and anthropology to art. Later, while in residency at the Studio Museum, she moved to Harlem and started painting people from the neighborhood – among them the protagonist of the museum’s painting Shirley (Spa Boutique2go), dated 2018. The work traveled to New York in 2020 for the artist’s solo exhibition Jordan Casteel: Within Reach at the New Museum and is now back on view at our museum for all to enjoy in the exhibition Multiple Voices/Multiple Stories.

When first sharing my thoughts on this painting, through the Weekend Readings for our Director’s Circle members, like many of us, I was thinking about how we – the museum, Rollins, myself – can walk the increasingly urgent talk we are engaged in with respect to diversity, equity and inclusion. I continue to converse with board members, staff, museum peers and local arts leaders, attend webinars and read quite a bit. One of the most important things I have heard repeatedly is that in matters of DEAI, the process is perhaps even more important than the goal. When we received the catalog for the New Museum exhibition, and as I was reading an interview with the artist, I had one of those – allow me the cliché – aha moments. Jordan Casteel’s process in creating these Harlem portraits is what we all need to follow. No, I don’t suggest we all start painting like Casteel (nor would I dare think that we could). What I want to do is tease out some interesting parallels.

Casteel has often noted that she is interested in people on the periphery. When she moved to Harlem, she didn’t know anyone, yet she found herself “drawn to the people and the energy of 125th Street.”1 So in order to meet people – and find models for her paintings – she simply grabbed her camera, walked down the street, and introduced herself to people. This very simple act is, naturally, much more difficult than it sounds, especially for someone like Casteel, who confesses to being an introvert. Walking up to someone you don’t know, in an unfamiliar neighborhood, and introducing yourself would certainly take most of us outside of our comfort zone. The artist tells the story of the first person she introduced herself to, James (the final painting, also included in the NY exhibition, is illustrated here):

“I walked past him but came back and introduced myself. I had to hold myself up to say hi. But it was as simple as ‘hi, my name is Jordan. This is going to be a little strange, but have you heard of the Studio Museum? [many people did not, so a bit of a converation about the museum followed] And I’m like, my goal is to get you on the walls of the museum. Would you be willing to participate in this project? I just need to photograph you, and then I’m going to get your information, stay in touch with you, and you will come to the opening and celebrate.” Later on, when the painting was finished, she had to go back several times to convince James to come to the studio and see the work. He’d say “Okay, little photographer girl, leave me alone. Whatever.” But persistence paid off. During open studios, he did come – reluctantly, at the very end of the day. Casteel said it was one of her favorite moments ever. “He looked at me and he said ‘oh my god. I thought it was going to be a little drawing or something. I have to go get my wife.’ And he ran out and then 20 or 30 minutes later Yvonne, his wife, arrived, and she said ‘thank you for seeing him as I have always seen him and sharing that with the world.’”2

That’s when the comparison hit me: she is describing the very process we need to embark on. If we say we want to be welcoming and inclusive, we cannot wait for people to come to us. We need to go out of the walls of our institutions, out of our comfort zone. Seek people out, be genuine, introduce ourselves, ask questions. Get to know them – and here’s the most profound and at the same time the most difficult part of it – try to know them as those who love them know them. Jordan Casteel does that with an ease that leaves most of us awed and jealous. We cannot all do that. But we can follow the process, and hope for small steps forward. Her paintings teach us kindness, honesty, respect and the beauty of difference.

I didn’t expect this connection at all when I picked up the catalog. Yet this demonstrates with utmost clarity what I have intuitively known since I chose my profession: artists lead. Today’s artists show us the way, and all we have to do is look, listen and follow.