By Ena Heller, Bruce A. Beal Director, CFAM on July 1st, 2021 in Dr. Ena Heller, The Alfond Collection of Contemporary Art at Rollins 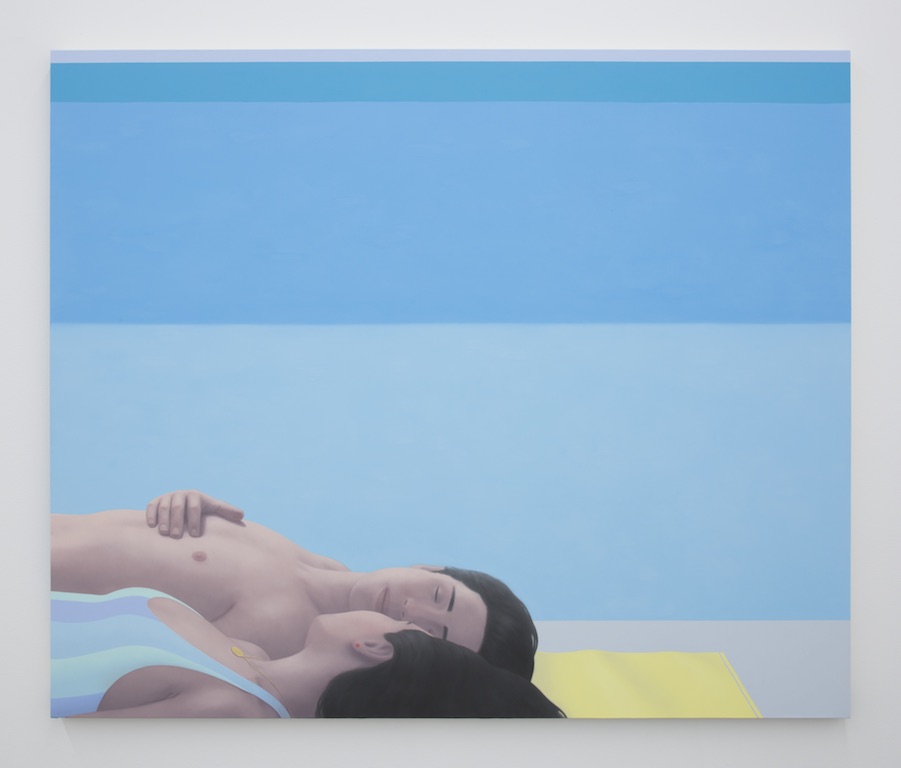 Earlier this week I happened to get off the elevator on the second floor of The Alfond Inn. I had not been on that floor recently, so it had been a while since I had seen Ridley Howard’s Motel Pool.  One of the best things about working in a museum is that, while you get to live with a collection, you don’t see all of it all the time. And there must be an art historical version of “absence makes the heart grow fonder,” because again and again, when I haven’t seen a particular work for some time,  it manages to surprise and delight me anew. It is precisely what happened this time. The painting is centered on the wall directly in front of the elevator doors, and yet, when I took it in I had the distinct feeling that I was looking at a corner of a larger composition, stepping into a generous space of which the canvas was but a fragment. The off-center placement of the figures, only partially visible, and  their presence very close to the picture plane made me feel I was intruding in the private, tender moment shared by the couple.

Tender moments are precisely what much of Ridley Howard’s painting is about. He talks about doing “fundamentally romantic painting,” purposefully including “a kind of escapism in image and process.” In  Motel Pool, the romantic dimension is easy to read: a couple laying on a towel together, their bodies so close they read as one. So too, is the escapism of youthful, beautiful bodies in repose and, one imagines, on vacation somewhere warm and sunny. Delicate sensuality and gentle luminosity embrace the painting, spilling to its viewers: it’s hard not to feel a little lighthearted. Yet if that was all Ridley Howard’s paintings were about, he would be a very different painter. Instead, he surprises with a parallel dimension, more cerebral than expressive.

Behind and around the figures, the majority of the painting reads like an abstract composition: bands of different shades of blue, more saturated as they get closer to the top of the canvas. The color variation plays with our perception of space: according to the laws of perspective, distance is inversely proportional to color saturation. Here, instead, the figures in the foreground are soft and hazy, while the top band of color, farthest away from us, is the brightest blue. According to Howard, even when the backgrounds contain references to real places, they are “fictional versions of those places.”  I think they could also be characterized as symbolic. They are built gradually from layering paint, experimenting with  density and tonality, paying attention to the subtlest differences of tone. Their lightness belies a lengthy process of mixing color until the perfect shade reveals itself. Invariably empty of details, the backgrounds read as two-dimensional abstractions more than depictions of space. Other works by Howard – such as Diamonds in Gray Landscape, also part of the Alfond Collection of Contemporary Art at Rollins College  – let us in on the artifice fully: geometric shapes take center stage, inhabiting  the space without narrative links to the figures.

As I looked at Motel Pool anew the other day, I realized that  it is this unexpected juxtaposition of off-center, fragmented figures – often couples tenderly kissing or immersed in one another, or female figures with slighlty outmoded makeup, as if belonging to an earlier era – and the spaces they don’t quite inhabit, abstract and textural backgrounds reading almost as independent compositions, that makes Howard’s paintings unique. They are built from two incongruous parts which, ostensibly, do not belong in the same painting – and yet they match and complete each other perfectly.  I turned away from the painting with a smile on my face.