The Notion of Place 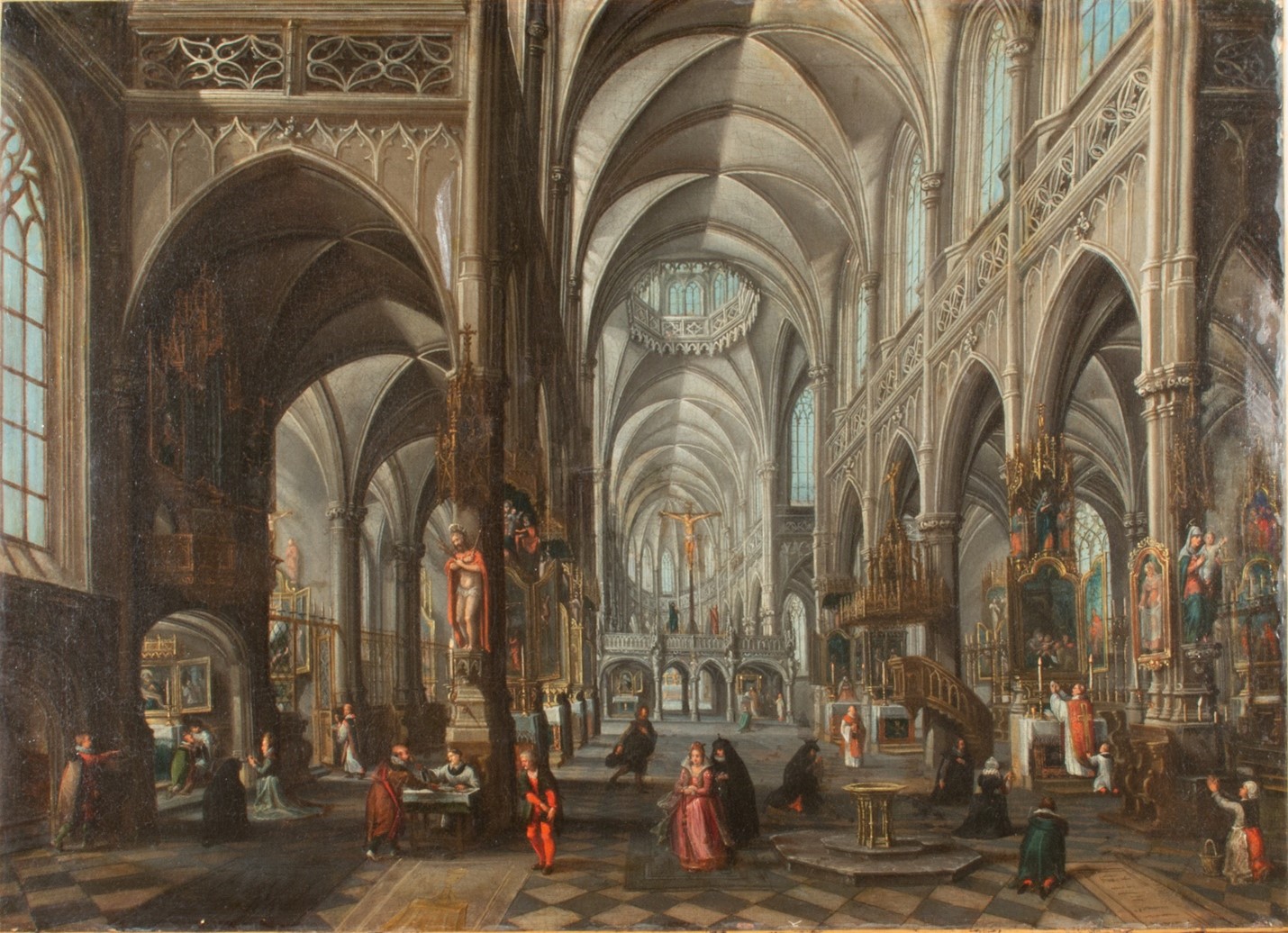 Last season, it had been two years since we introduced the theme of Place as Metaphor for our main collection gallery. Every season, we changed the installation somewhat, brought in new acquisitions and old favorites that had not been on view for some time. Throughout, we let the art introduce varied definitions of “place:” real and imaginary, familiar and fantastic, realistic and abstract.  What we did not know when we chose the theme was how much the notion of place would change for all of us due to the pandemic. Nor did I realize how much the experience of the last year will impact the way we look, the details that speak to us, the resonance they acquire.

Take the painting Interior of a Cathedral, ca. 1630, attributed to Hendrik Van Steenwijck II (1580-1649). The Van Steenwijcks (father and son) were the among the most prolific painters of architectural scenes, a specialty that became increasingly popular in seventeenth century Flanders and Holland.  Offering painters the opportunity to flaunt expertise in the rediscovered and much talked about art of perspectival studies, architectural scenes became a true speciality at the time, to the point that the figures populating these interiors were frequently added by a different artist – a little known yet fascinating fact that probably deserves its own post. Many of these paintings do not depict actual buildings; they are composite constructs that embody more the ethos of the church and the styles prominent at the time than a particular building. Our painting seems to be inspired by the Cathedral of Our Lady in Antwerp (painted several times by Steenwijck, both father and son, as well as by other contemporary artists), with the inclusion of several details incongruous with the gothic cathedral. The most prominent of these is the octagonal cupola glimpsed above the crossing, in front of the main altar. Steenwijck II shows his mastery of perspective by using a compositional device he is rather fond of, a point of view slightly to one side of the center, which enhances the perspectival challenge. He also uses a relatively low point of view to increase the illusion of participation: we look at the interior through the eyes of one entering it. This simple artifice invites us to come in, to be in the crowd, to participate in the goings on inside the church.

And it is precisely what is depicted as going in the church that I was reflecting upon back in February when I stopped in the gallery to look, yet again, at Interior of a Cathedral. People are seen throughout the church: alone, in pairs or small groups; kneeling, standing, walking, sitting. Most are clearly engaged in what we expect to see in a church: solitary praying or participating in services performed by priests. The abundance of altarpieces, both painted and sculpted, informs us that this is a Catholic church  – an important messaging point in an era still marked by religious strife brought about by the Protestant Reformation.  But it is the two figures in the left foreground – one sitting, the other standing in front of a table at the foot of a pier decorated with a larger-than-life statue of a crowned Christ – that caught my eye.

We do not know exactly what the two men are doing – but what we do know is that back in the Renaissance, churches were so much more than just places of worship. We know it from eye-witnesses, contemporary preachers and writers bemoaning what was going on. In the fifteenth century, for instance, the Franciscan Bernardino of Siena was a strong advocate for keeping the sacred spaces of the church free of anything other than worship. Things he observed going on that he was completely against included, among others: dances; business negotiations; girls being paraded before potential suitors; school and club meetings. It is not difficult to imagine the elegant young woman with a chaperone in the foreground of our painting, or the two men at the table, as conducting some of those very activities. Documents I have seen in the Italian archives also mentioned children and dogs running in the aisles; mercenaries – plus the occasional horse – resting; selling and buying (not to mention stealing) of all types of merchandise; and even the more shameful using of dark corners for varied bodily functions.

That was when an unexpected similarity struck me. This past year, our homes took on so many new functions – they were home and office for us, school and playground for our children. Our living rooms were movie theaters and our kitchens, cafes and restaurants. While all along still being our homes, our safe places. The comparison may strike many as entirely arbitrary – but for me it reinforced the (so often under-analyzed) connection between function and specific context: at least part of the reason why many of those “other” activities took place in churches was precisely because they were safe places, not to mention the spiritual and social centers of towns and cities. Churches were the places where people found community, solace, and one another.

Revisit the Winter 2021 installation of The Place as Metaphor: Collection Conversations via a 360-degree virtual view.