Work of the Week: Shirin Neshat, “In Deference” 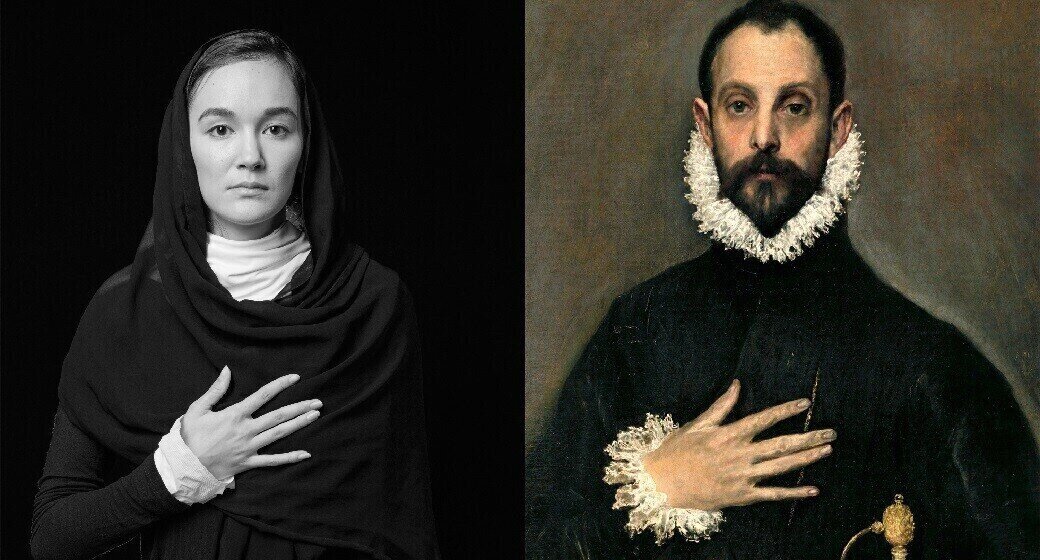 I first encountered Shirin Neshat’s work in an AP Art History course in high school. I researched Neshat’s 1994 “Women of Allah” series—which garnered the artist significant attention in the art world—and was struck by the simplicity and poignancy of the distinctive black and white photographs. I was especially captured by the work Rebellious Silence, a self-portrait of the artist whose eyes stare directly out at the viewer from a face inscribed with Arabic calligraphy. When I began as a student at Rollins and entered RMA for the first time, I found myself again gazing into the eyes of this powerful artist whose My Beloved featured in the museum’s 2016 exhibition Displacement.

This year, the museum welcomes a second work by Neshat into the collection. Taking the form of a diptych, In Deference (2018) invites comparison between two figures whose costume, gesture, and expression imitate one another but whose images likely elicit different reactions from the viewer. The artist appropriates Spanish artist El Greco’s The Nobleman with his Hand on his Chest (ca. 1580) which she places alongside a contemporary photograph of an Iranian woman in traditional dress. This unexpected juxtaposition begs the viewer to consider their perceptions of the two figures, carefully reflecting on personal biases and (mis)conceptions of the “Eastern” and “Western” individuals. The title of the work, “In Deference,” suggests both respectful regard and humble submission, perhaps implying a power differential between the figures. The title could also represent a play on words, alternatively relating to the phrase “in difference,” which underscores the perceived disparities between the Iranian woman and Spanish man. Asserting her own Middle Eastern, female perspective, Neshat encourages us to critically consider how we view those seemingly different from ourselves.

View this work by Shirin Neshat on our Collection page.