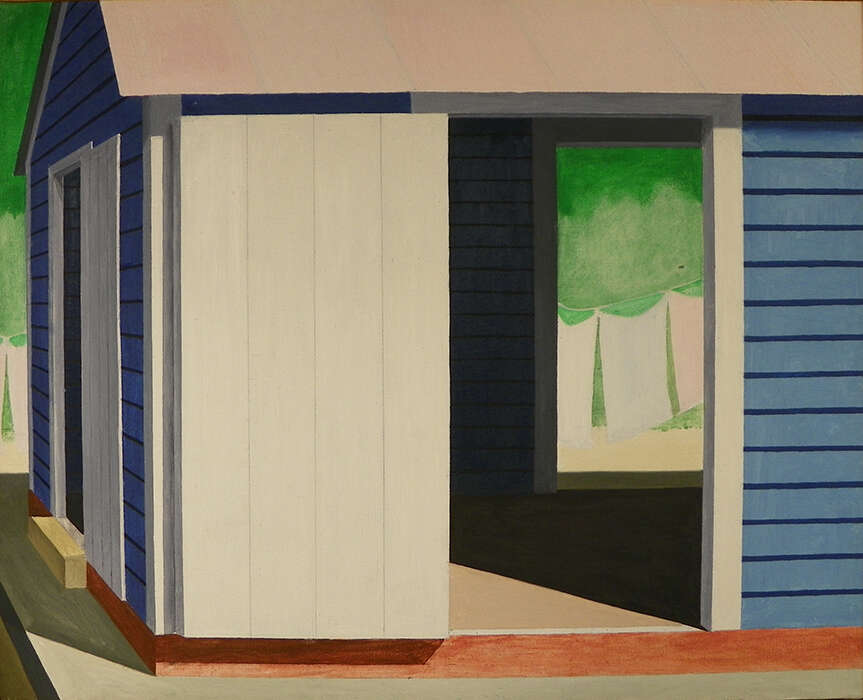 The last time I had the opportunity to write in this space, I chose a work that evoked the soft greyness of a winter’s day. Now, months later, I am itching to get out into some sunshine. Appropriately enough, I chose to write about Emilio Sanchez, whose works both represent and evoke the brightness of the Caribbean while also engaging with the modernist painting of
the middle of the twentieth century. Sanchez was born in Cuba, to a wealthy family that was involved in the sugar trade. Like other members of Cuba’s pre-Revolutionary upper class, he was mostly educated in the United
States. After a few years in Florida, he made his was to the Northeast, where he overlapped at Choate with future President John F. Kennedy. After college (Yale followed by the University of Virginia), he studied at the Art Students League, splitting his time between his father’s estate in Cuba, his mother’s residence in Mexico, and New York. He also traveled throughout the Caribbean, gathering subject material for his prints and paintings depicting the bright sunshine and vernacular architecture of the region.

Also like many members of his class and generation, Sanchez did not return to Cuba after 1960, though he continued to travel to other places, including St. Barts, in the Leeward Islands on the eastern edge of the sea. There, as elsewhere, he became particularly interested in the local wood frame houses, both because they reminded him of his youth and because the style was rapidly disappearing, replaced by prefabricated structures in more modern materials. He increasingly began to specialize in close-in views of these buildings in which doors and windows are open, allowing glimpses of the outdoor spaces beyond them. In addition to signaling the humble domesticity of such spaces—witness the laundry hanging outside this house, for example—this compositional choice allowed him to examine the purely formal qualities of light, shade, and color. Sanchez’s career came during a time when abstraction was dominant in American art, and while he never abandoned representative subject matter, his works share something of the quality of his colleagues in the Color Field School, in particular the way his thin pigments seem spread across the canvas, coating it in a smoothly silky wash of color. His refusal to abandon figuration kept him outside of the artistic mainstream, but his work—thanks to the efforts of the Emilio Sanchez Foundation—remains
as evidence of his unique contribution to midcentury American painting.

See this work by Emilio Sanchez on our Collection page.