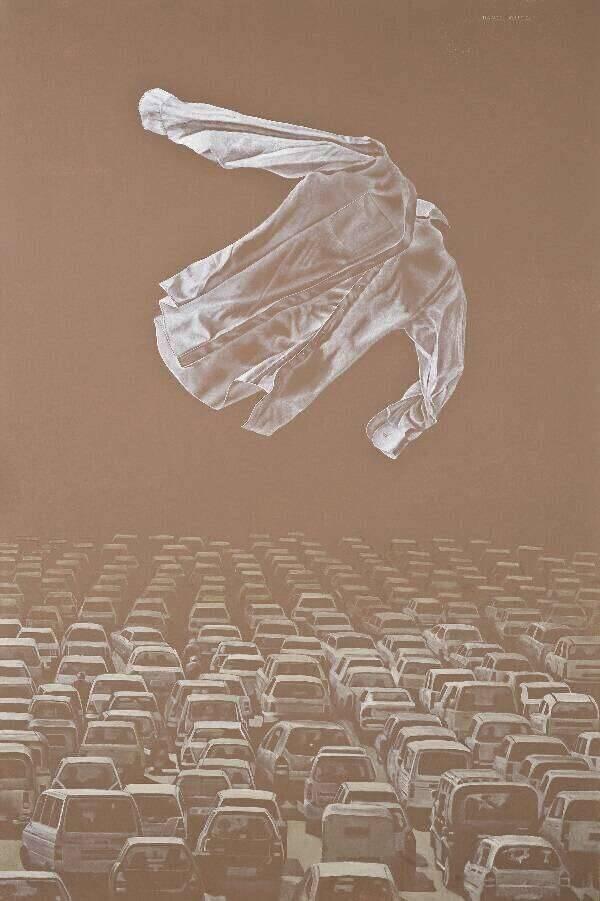 What is Magical (or Magic) Realism? For some of us, it might just be the thing they talk about for two seconds in the first episode of Narcos. How is it different from Surrealism? That question runs a little deeper than a blurb at the beginning of a Netflix show. This 2011 painting is by Rafael Trelles, an internationally acclaimed Puerto Rican artist who had their traveling exhibition Rafael Trelles: The Imagined Word on view at the Rollins Museum
of Art in Fall 2021.

At its simplest definition, Magical Realism is a genre of art (including visual art and literature) characterized by the inclusion of fantastical elements or events in an otherwise realistic setting. The term was most famously first applied by Cuban writer Alejo Carpentier to describe what he saw as a growing trend in Latin American literature of the time, and is most famously associated with Latin American art. Although Magic Realism is often labeled as Surrealism, the key difference is that Surrealism is based in images of the subconscious, of dreams, and Magic Realism deals in, well, reality.

In La Autopista del Sur (The Southern Highway), Trelles draws inspiration from the 1964 Magic Realist short story of the same title by Argentine novelist Julio Cortázar. The story follows a nameless man—simply the Engineer—through a months-long traffic jam on a highway leading into Paris. As the jam persists, the trapped motorists form a microcosm of society, the young and the old finding solidarity and comfort in each other as they must distribute resources, tend to the sick, et cetera. But while the situation does create community, the story also serves as a commentary on the solitude of contemporary society as, at the end, the jam dissolves, and the many characters break apart and speed off, alone once more in the rush of modern life.

Trelles’s painting shows the central subject of the traffic jam, with the geometric cars stretching from detailed and individualized forms in the foreground to simple broad strokes in the far distance, suggestive of atmospheric perspective. Above this solid block of automobiles, a diaphanous and delicately rendered shirt floats on a nonexistent breeze, although the flat tan of the ground on which these elements are painted traps all in the same stale and unmoving moment in time. The shirt—the Magical Realist element to the work—can be read as representative of the solitude we experience as our lives become more and more secluded from one another in the age of technology and automation. Still, as in the story, there remains the unity of the gridlocked cars, representing the human tendency toward community in chaos. These representations of the individual and the collective, of the
fantastic and the real, stand side by side, contrasting each other literally and figuratively.