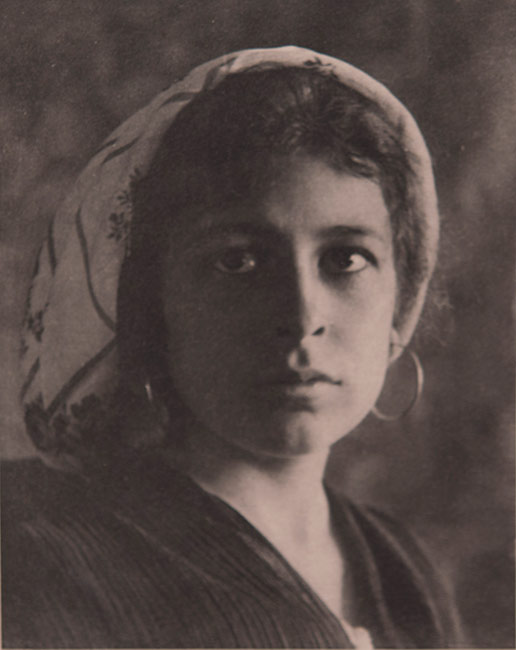 F. Holland Day, the creator of this work, would be considered something of an eccentric today. In fact, he was considered something of an eccentric in his own day, as well. Day was the son of a successful businessman in Norwood, Massachusetts, and early on showed an interest—nurtured by his parents—in art and literature. Though he did not attend college, Day quickly fell in with a crowd of bohemians in Cambridge and Boston, with whom he carried out wide-ranging discussions on art, beauty, and life, often over beers in one of a number of out-of-the-way taverns on either side of the Charles River (which divides the cities of Cambridge and Boston). During this period Day became fascinated by the work of British artist and social reformer William Morris, whose Kelmscott Press produced lavish editions of works by Romantic poets and copies of illuminated Medieval manuscripts, among other delights. Determined to follow in Morris’s footsteps, Day established the firm of Copeland and Day with a friend. They quickly made an impact on the American art book market, producing the first American editions of such important works as Oscar Wilde’s Salomé and the periodical The Yellow Book, both illustrated by Aubrey Beardsley.

In addition to his work in publishing, Day traveled widely in Europe, North Africa, and West Asia, bringing back with him a large collection of traditional costumes, textiles, and furnishings. He became known for wearing these garments around Boston, cutting an extravagant and eccentric figure in the buttoned-up city. In the 1890s he became interested in photography, which had not yet become the artistic medium we know it as today. Photography was first popularized for the creation of portraits, and in the latter half of the nineteenth century became increasingly prevalent in various scientific disciplines. Day, who was entirely self-taught in the medium, was a pioneer in its use as an artistic medium. He is now recognized as one of the earliest and most important exemplars of the movement known as pictorialism. Pictorialist photographers self-consciously sought to make works of art, manipulating both the composition and development of a photograph to create an artistic image. Frequent elements of pictorialist photography include allusions to classical art; enigmatic subject matter; hazy, gauzy, and blurry images; and strong contrasts between light and dark.

Ziletta, this week’s Work of the Week, bears all the hallmarks of Day’s pictorialism. The young woman—perhaps a classmate of his from Boston’s Chauncy School—wears a head wrap, earrings, and dress that Day likely brought back from his travels. The origin of the name Ziletta is unclear, though one clue comes from an alternate title, Woman in Gypsy Costume. There is no evidence that Day knew any Romani people, and the title and accompanying costume are reliant on familiar stereotypes. The young women faces the camera directly, her luminous dark eyes staring intently—yet mysteriously—ahead. The light source is such that half of her face is brightly illuminated, while the other half is thrown into dark shadow. The background is a mottled blur, keeping the viewer’s attention squarely on her strong and beautiful face.

Day’s photographs of women gained him wide renown on both sides of the Atlantic, and he was invited to join the Photo-Secession by its founder, Alfred Stieglitz, another leading pictorialist photographer. Day refused, however, preferring to maintain his autonomy. Throughout the proceeding decades he pursued that vision where it took him, including to places which made others uncomfortable. He scandalized his neighbors in Norwood in 1896-1898, staging a series of outdoor Crucifixion scenes—inspired by the famous Passion Play at Oberammergau in Germany—in which he played the role of Jesus. He also made a number of strikingly beautiful, enigmatic male nudes, subjects which were controversial during his time. Eventually, Stieglitz and other members of Photo-Secession moved on from pictorialism, coming to favor a style they called “straight photography” which was supposedly free of the artistic flourishes and manipulations that characterized pictorialism. Day fell increasingly out of step with these currents and was largely forgotten as a pioneer of American photography, though recent scholarship has gone a long way towards reviving his reputation and historical importance.

To read more on this work by F. Holland Day, visit our Collection page.