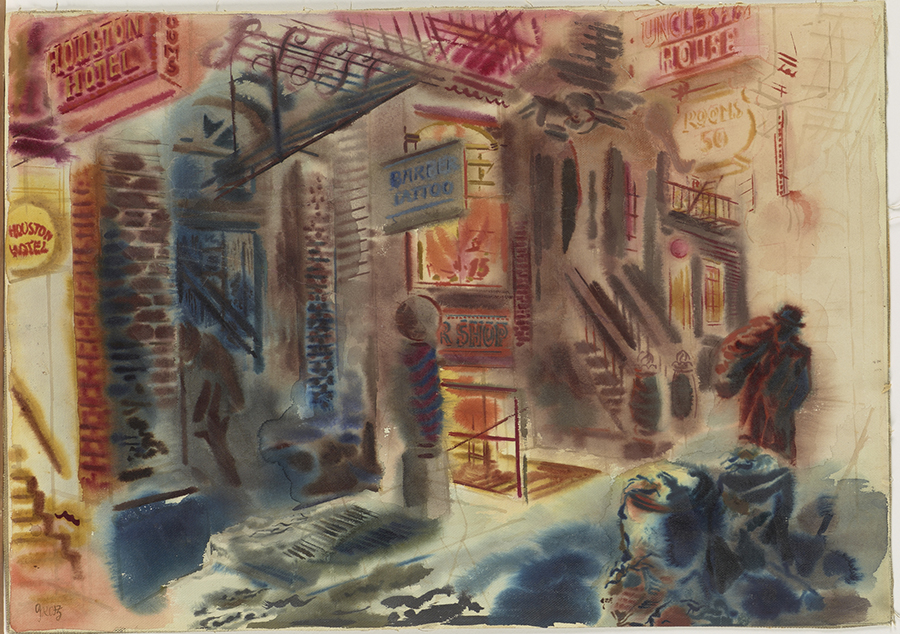 Art is often a reflection of the circumstances in which it is created, and a powerful testament about the human condition that emerges from personal and collective experience. There are plenty of instances in modern history that evidence the need to create in moments of great upheaval. Avant-garde movements were born in Europe during WWI and major shifts in artistic style developed as the United States recovered from the Great Depression. Like literature, theater, and music, an artistic gesture can capture the gravitas of a historical moment in a way that, even decades later, resonates with contemporary viewers.

In these times of social distancing and stay at home orders, cities around the world have been transformed in a way that perhaps we haven’t seen in our lifetime. Through this situation, I have been thinking about works in RMA’s collection that capture the effects of world-wide events on the urban environment and the artist’s experience. In City Lights, German American artist George Grosz depicts Houston Street, Manhattan in the 1940s. We see the street at an angle, as if we were crossing and approaching the sidewalk. Neon signs indicate the entryways to hotels, a barbershop, and other places of business. On the right, a solitary figure approaches in the viewer’s direction towards the overthrown trash bins in the foreground. Far from idealized, the scene conveys a sense of the mundane; the blotchy application of color emphasizes the ordinary in this city view.

More than 70 years later, New York, along with so many other cities around the country are being transformed once again by the measures implemented to slow the spread of COVID-19. I can’t help but wonder how the current experience of the city and the “new normal” will be represented in works of art for future generations to learn about this moment, just like Grosz’s works continue to resonate with us today. Looking at City Lights I try to imagine how an artist who left Europe after WWI to escape Nazi persecution arrived in New York in search of freedom and opportunity and experienced the changing urban landscape, transforming all around him as the U.S. entered WWII.

To read more on this work by George Grosz, visit our Collection page.