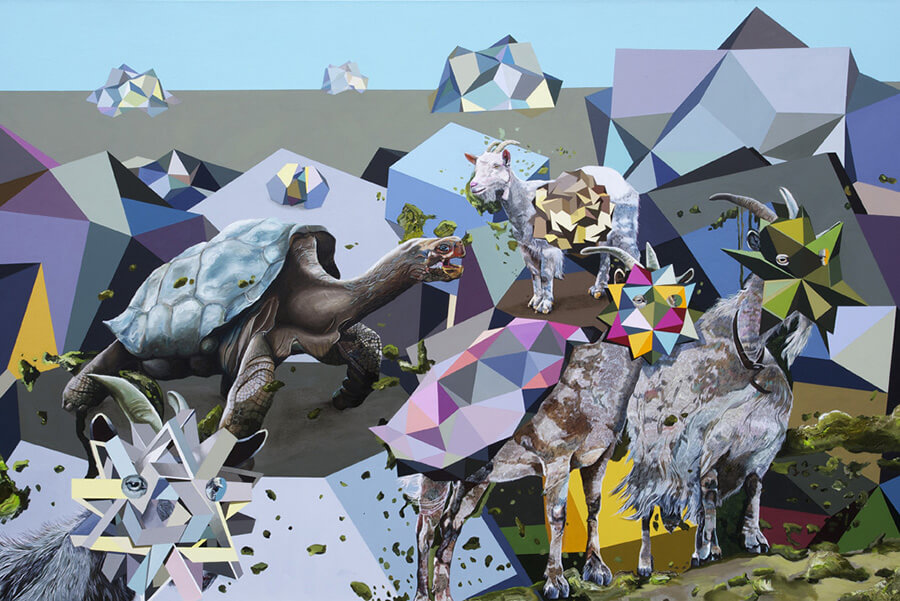 This is the tale of Lonesome George.

George was the last surviving Pinta Island tortoise and at one point in time the rarest animal in the world. He was found by the scientist József Vágvölgyi on the island in 1971 and relocated to the Charles Darwin Research Station on Santa Cruz Island a year later for safekeeping and breeding since, now that he was in captivity, his species was considered functionally extinct. While there remained ultimately false hope that another surviving Pinta Island tortoise—preferably female—would be found, George was penned with several females from similar species in hopes of retaining some of his DNA within the offspring. Several attempts produced clutches of eggs, but none ever hatched. In June of 2012, at just over 100 years of age, George suffered cardiac arrest and passed away, and with him the Pinta Island subspecies.

This begs the question: how did George become so lonesome?

In his work, Lonesome George, from 2013, Juan Travieso provides clues to the story. The progressive disappearance of tortoises from the Galápagos is the consequence of exploitation from the whaling industry. During the nineteenth century, protein hungry whalers and the introduction of feral goats to the island’s ecosystem decimated the number of tortoises across various subspecies by 90% through hunting and devastated vegetation. Travieso draws on these themes through the fragmentation of space and juxtaposition of realism and geometricization that has become his signature style. Using these techniques, he creates tension within the painting between George as the protagonist and the goats as antagonists. The goats are fitted with sharp, angular masks mimicked by the surrounding landscape receding into the distance.

Does this connection serve to tie the goats to the havoc they wreaked? Are they wearing
masks to hide their shame? In contrast, George stands as a focal point, the details of his
countenance realistically rendered. Yet the goats’ soft coats beneath the hardened masks and
shells questions their implication in the matter. The Galápagos goats were completely
eradicated by 1990. To what extent were they culprits or in fact additional victims of human
intervention?

Travieso’s work is ripe with environmental concerns and a call for action. The jarring effect of
his spliced paintings serves as commentary regarding the negative impact of human
interference in natural ecosystems, frequently referencing species’ endangerment and
extinction. These themes reflect a compassion for the vulnerable and under resourced, a
likely byproduct of growing up in communist Cuba. He also credits his use of bright and
expansive color palettes to the lack of art materials available to him on the island at the start
of his artistic career. Lonesome George raises important questions regarding the ties between man and nature, asking for careful consideration as we inch closer to the point
where humans become victims of their own circumstances and reflecting on the ripple effects
of even the smallest actions.

To learn more about this work by Juan Travieso, visit our Collection page.