By Gisela Carbonell, Ph.D. Curator on August 8th, 2022 in Blog, Work of the Week 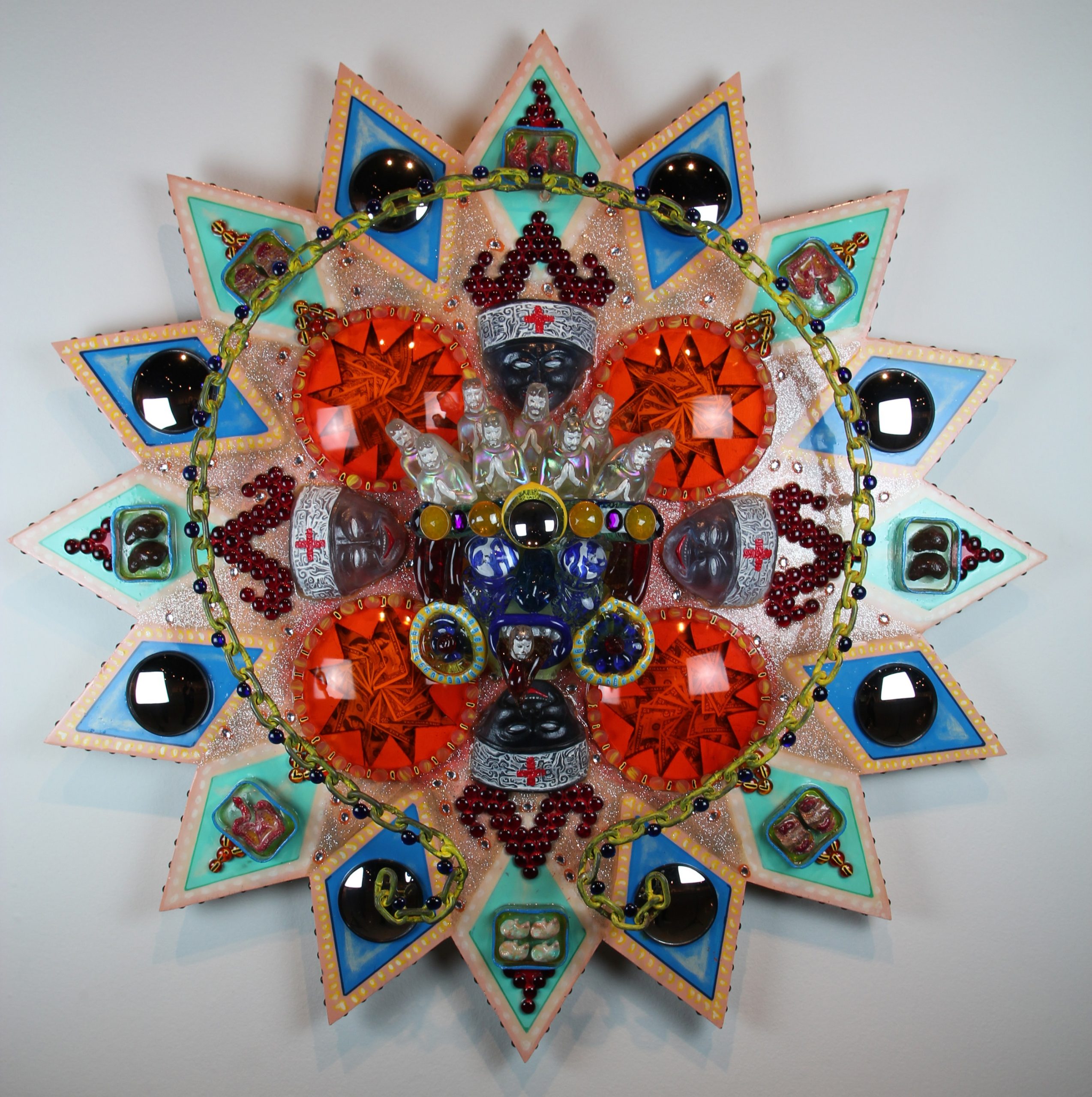 The Aztec calendar, toys, catholic figurines, mirrors, chains, plastic, glass, paper, glitter—this piece by Einar and Jamex de la Torre titled Organ Exchange contains as many materials as layers of meaning. Acquired for the museum’s permanent collection in 2019, on the occasion of their exhibition De La Torre Brothers: Rococolab, it brings together the world of kitsch and fine art. The carefully arranged conglomerate of objects and textures is emblematic of the De La Torre brothers’ unique aesthetic: contradictory, nuanced, bold, and, as they call it, maximalist. It is baroque but also contemporary, direct while encouraging deep reflection, and made of everyday objects that address profound subject matter.

Einar and Jamex were born in Guadalajara, Mexico in 1963 and 1960 respectively. They moved to the U.S. at a young age and attended school in California, where eventually they studied art and discovered their passion for glassmaking. Currently, the artists live and work on both sides of the US-Mexico border with homes and studios in Ensenada and San Diego. Attuned to their experiences and surroundings, their artistic vision is informed by their experiences as Border artists whose identity is neither exclusively Mexican nor American, but instead enriched by both. The complexities of identity are at the core of the brothers’ creations; symbolism, history and humor are often the avenues they employ to examine them. In Organ Exchange the De La Torre Brothers examine the personal in the context of history and its collective implications. I have been thinking a lot about this work as we navigate issues of public health and witness heated debates about science and human behavior in our country and around the world.

Organ Exchange was inspired by the De La Torre Brothers’ experience with organ donation 2001. After it was determined that a close relative needed a kidney transplant, the brothers were tested to find a match. The process led the artist-duo to create this work as a reflection on the value of the human body versus the value of its parts. The format evokes that of an Aztec calendar with a face in the center and the words “eat me” painted over the eyes. As we stand to observe the piece, our reflection is captured by several convex mirrors making is part of the work. These elements create transhistorical associations that resonate with our current moment. Like cultural critics, Einar and Jamex oscillate between the personal and the political, the contemporary and the ancient, pointing out the irony of the new and the persistence of history. In their words: “Our art making process is sort of a laboratory where new compounds and hybrids are derived from vernacular cultural symbols.”

Although at first glance, this object may seem humorous or disjointed, its power resides in the questions it raises: who is entitled to a transplant? Or more generally, who is deserving of health care? Who decides? Who has the resources? How are resources allocated? Is it justifiable to procure resources by means other than those sanctioned by governments? In this process, who is left behind? What sacrifices are some expected to make? These last questions are referenced by the idea of human sacrifice in Aztec culture as seen in the central glass element of the work. With the discussions about public health taking place as we battle the rapid spread of Covid-19 and prepare for the start of another academic year, reflecting on this work of art makes me think of those in other countries who perhaps are not as fortunate
to have the resources we do to protect ourselves against this disease and who will be impacted most by our choices.

Learn more about the work of the De La Torre Brothers and their 2019 exhibition Rococolab
on our past exhibitions page.