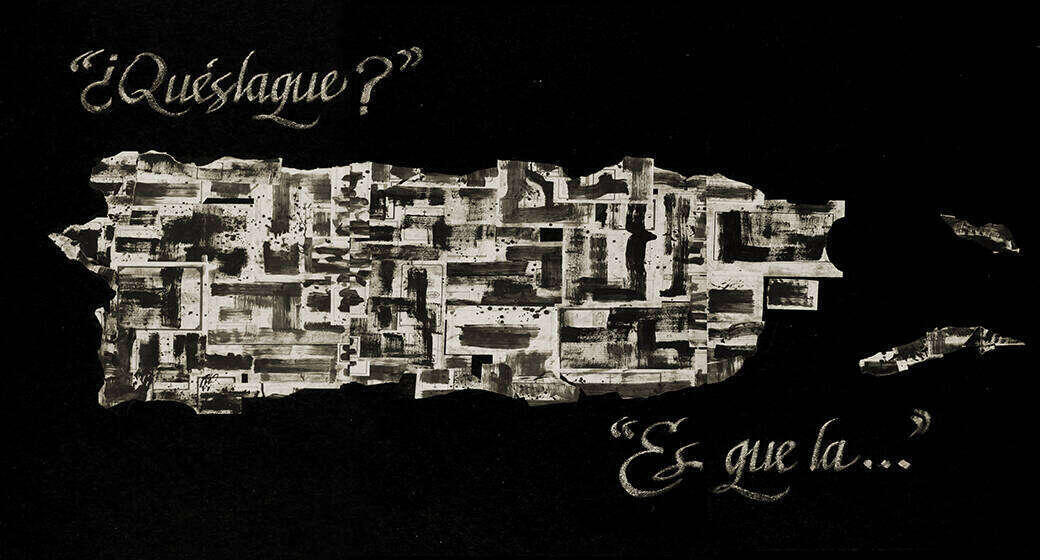 “¿Quéslaque?” is Puerto Rican slang for “What’s up?” or “Whassup?”. As viewers, we read this
familiar question at the top left of the large artwork in funereal black and gray tones. This
colloquial greeting is placed next to a silhouette that we can recognize as a map of the island
of Puerto Rico (center) and the smaller islands of Vieques and Culebra (on the right).
As we get closer to the image we realize that the small partitions within the map of the island
are not its municipalities, but cutouts from local newspapers. These are actually partly
effaced obituaries of many individuals who died as a consequence of the paths of hurricanes
Irma and Maria. These Category 5 storms with wind gusts of up to 178 MPH ravished the U.S.
Virgin Islands and Puerto Rico within two weeks of each other on September 6 and
September 20, 2017. While the official death toll was grossly underreported by the
authorities for political and methodology reasons, it has been anecdotally and personally felt
deeply by all of us connected with the islands.

Antonio (“Toño”) Martorell (born 1939) is a Puerto Rican multi-media artist, educator, and
writer, and a pillar of Caribbean contemporary art history. An intellectual, an artist of artists,
and an artist of and for the people, Martorell‘s prolific body of work spans over six decades,
consistently making references to the histories, diversity and resilience of Puerto Rican
culture in face of adversity. Martorell’s artistic practice dissects and reveals encoded systems
within culture and daily life by examining the intersections of language, the imaginary of self-representation and public spaces.

While his art and pedagogy are rich in aphoristic observations, these are far from
sanctimonious. The question “¿Quéslaque?” comes across as an act of humble approach and
willingness to engage. The map reveals the reality that the islanders are faced with: a grave
catastrophe within an accidental topography, a history that has been again sinisterly
attempted to be erased, a devastation of silence and inaction.

The brief slowed down response “Es-que-la” at the bottom right reminds us of when we are
stunned and fail by responding with a “It’s that…ehhh, hmm”. Medically speaking, this is no
less but an example of the impact of induced anxiety on affective response inhibition.
Somberly, in Spanish “esquela” also means “obituary”.